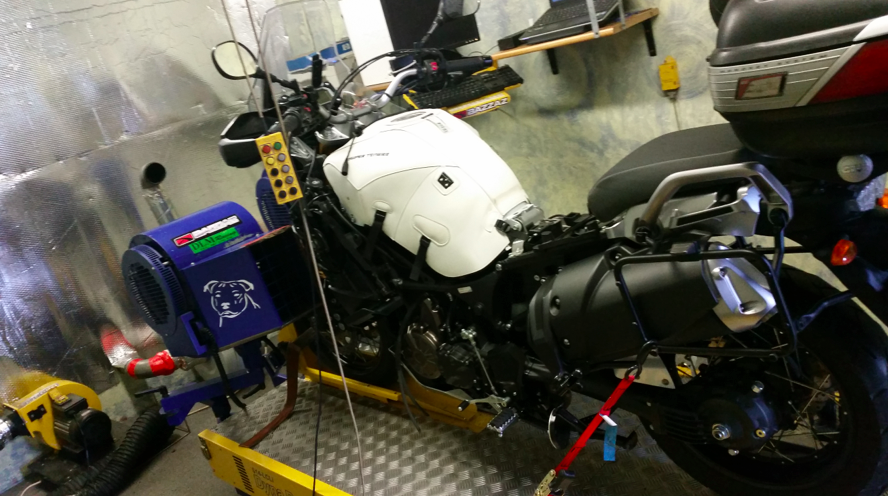 I was dropped up this 2013 Yamaha Super Tenere XT1200Z as the customer felt the throttle was really snatchy in the lower rpm. He was struggling to ride it around the city center without needing to ride the clutch a lot to make the delivery smooth.

This customer was also looking to increase the mileage he got out of a tank.

I know that these Yamaha’s also have a gearbox restriction electronic throttle valve (ETV). In plain English – they make is slower in first, second and third gear. Yamaha do this to make the bike for the masses!. This particular customer was also interested in trying the map with this removed

So what did we end up improving on the Yamaha XT1200Z Super Tenere?

I generally release the restrictions I mentioned in the lower gears – it’s a no brainer IMO.

I build in a custom fuel map to the Super Tenere’s ECU.

This bike was running a standard exhaust and standard air filter so I ran it through the dyno to double check the baseline settings I’d work from.

This bike was quite restricted in it’s peak horsepower numbers. This ECU work released almost 10bhp in lower gears and 2bhp at peak. I’d imagine there was a bit more available but we’ll need to get one with an aftermarket exhaust to prove it (we have one due next week).

Ray (the bike owner) came back to me and has ran his own test on the MPG – apparently he’s now getting as high as 53mpg which is a big improvement for an XTZ12.

[quote align=”center” color=”#999999″]I left the bike to a local qualified guy here in Dublin ( Gary Donohoe ) who has good experience with race engines, rebuilds, servicing etc, on all makes of bike. He currently works for Megabikes here in Dublin city centre ( also worked for NDM ).

He has recently got software for ECU flashing. He has a good understanding of electronics etc so I was confident in his ability & i know him well enough to be at ease. I asked him to get the data for the 1200 tenere which he did. I really didn’t know what to expect re results, but said what the hell anyway.

He has a small but fully functioning workshop with access to a dyno room in the city.

The bike before it went is was fine, ran a little rich, but has been since I first bought it new in Oct 12. The low down take off was lumpy-ish, 1st – 3rd was flat and midrange was just ok. The gears were restricted as stock settings. Im not saying it was all bad but I was happy enough. Its was the way Yamaha had the engine. Petrol consumption was about 43 mpg, not bad, not exceptional either. They are a big bike and the way they come from the factory to meet regs etc choke them to death.

whats it like? Astonishing in a word. It has completely transformed the bike. Ive got more acceleration, better mpg ( avg 53 mpg at the moment so thats up ) , better midrange with 10 bhp increase. The first three gears feel almost twice was they used to be re power. They are no longer flat. That restriction is gone. The response from the throttle from take off in 1st – 3rd is very sharp. Pin throttle accuracy and feel. The bike has two fuel modes “Touring” & “Sport”. The difference is night and day now compared to before.

Midrange on the motorway is great. It was never bad, but a lot more pep now. The bike is ticking over better, sounds different too. He also adjusted the fan temp setting and throttle position along with the fly-by-wire remap, rev limit and fuel map. Riding in the city is even easier now, I go through heavy traffic the odd time and the throttle and fueling is so smooth from before it was done, makes it even easier now to go v slow without stopping.

The best part of how he carried out this flash, he used the dyno. He didn’t just throw in generic settings like some that flash ecu’s. He adjusted the ECU / fuelling etc while the bike was ran on the dyno. Its perfect. So i would imagine this ecu flash could be better as the bike was actually dyno’d while being flashed as opposed to others with are just done with generic settings. This allowed the bike to be adjusted to optimum effect.

If anyone wants their ECU done by Gary,I couldn’t recommend it enough. [/quote]